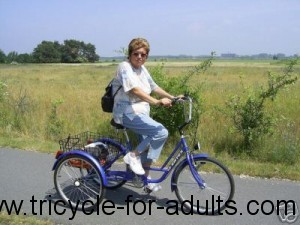 Many people wonder, even after visiting many pages of information as to why you should belong to the owners of a three-wheeler. The answer is as varied as the people you ask. Therefore, our company also offers a variety of options to satisfy every possible.

First, of course, the movement is mentioned. Many people are no longer able to draw on the more familiar bike back because of physical reasons, not more capable. Be it the weight, allowing for seemingly no more such activities, either. The current state of fitness, or the sense of balance, which often results from an early age to actually unnecessary restrictions So we told a customer that they have previously traveled long distances by bicycle, this is zutraue but not because of the danger of collapse. Since the tricycle was then the desired alternative. Because is was stable at all times, in stance as well as at low speeds and also allowed their weekly shopping easily. And in an age of over 80 years.

Also the lack of fitness is often held against a tricycle. Yet this ought to just speak it. Thus, besides the swimming hardly a joint gentler exercise, since they are no longer burdened by the whole weight. We also offer models in which an electric motor supported their own pedaling and thus the hill in their neighborhood is not an insurmountable obstacle.

The decisive argument here but it should be their own health. They shall recommend e.g. doctors osteoporosis (brittle bones) certainly physical activities such as long walks, swim or fahrrad-/dreiradfahren. For one thing, this will strengthen their cardiovascular system, on the other, by the way tumble the pounds when they no longer use for buying the car, but the tricycle.

The history of the tricycle

The history of the tricycle is closely linked to its two-wheeled “brother”. So both were with the beginning of the 19th Century first appearance. But unlike today, it was more a hobby of high society – they were mainly made ​​of wood and were driven like wheels. A first leap the tricycle made ​​by the transition from direct drive to the operation of levers, which now ensured for the appropriate heading. For many people, these vehicles were still too immature and bulky.

A tricycle development of the next leap made ​​by the transition from wood to metal construction (from around 1890), which proved to be the much stronger and more durable than metal, enabling additional applications. This is also that time was in the tricycle had a much more important than the bike, as its advantages such as greater stability, easier to learn and also the ability to transport large quantities of similar goods, clearly speaking for the tricycle. Only when the fun came through better equipment to the fore, it was replaced slowly but surely through the bike.

For an aging society but takes the fun back into the background, so the tricycle seen as a means of a new, a second boom.

Some important information for people who are concerned for the first time with three wheels:
• Three Cycling is not as easy, but with practice everyone gets! (Tricycle school)
Front wheel drive is the first three-time emotionally secure, with “normal” three-wheelers (ie two rear wheels), it takes 2-3 days for safe driving. But in principle it does not matter and their personal tastes, whether you ride a tricycle or a front tricycle.

CYCLING IS THREE HEAD THING! And a bit to do with patience.

• We strongly recommend a test drive to (Dates and Location Map). Ideas, such as “We buy a surprise for someone else” to go, unfortunately mostly wrong. So the dealer you trust should Runs multiple models and have a lot of patience for you!

Often people come to a dealer with a clear idea of ​​a model and then do nothing works. A tour of a wider range in the exhibition and sampling of other models mostly but then creates a satisfied customer who is happy with his new “other” tricycle.

For people with severe impairment or scared there seat tricycles and special therapy tricycles.

• Electric drive or not?
An additional electric drive provides safety in mind. You can normally without electric drive wheel fahren.Wenn you come on a slope or on a long trip, you leave the forces, the drive can easily be connected to the handlebars. From this moment, you always feel that you push one when you step (technical term: pedelec drive with sensor in the pedal crank).

In addition, most trikes have a “throttle” on the handlebars. Here the tricycle goes even without pedaling.

The range of the battery depends on the terrain and the weight. Depending on the type of battery, the batteries provide a range of 20 – 45 km. A second battery can be carried at all times and replaced with a Handriff.